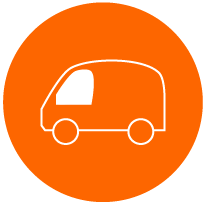 Jas Sandhu from Interlink often received calls from customers advising that a vehicle had gone past their house without delivering their parcels.

With his old system, Jas only knew where his drivers were once they had made a stop.

This led to a lot of ringing around trying to find out where his drivers were. Jas’s customers would also get more and more frustrated and would often call two or three times before Jas had managed to find his driver.

By providing AutoAlert units in each vehicle combined with a central web-based control centre, Jas now has all the information he needs on one screen including the current location of all his vehicles zoom-able down to street level along with the current route.

This led to a number of improvements for Jas including a big improvement in customer service as Jas could immediately tell where his drivers had been, what route they were on and when it was likely they would be delivering to the customer.

Jas also saw a reduction in administration as he could quickly print off reports such as driving times and working times allowing him to easily calculate overtime payments.

By being able to view the history of routes taken by his drivers, Jas could better plan, optimise routes and save on fuel costs and time.